On April 20th I sat down for a phone call with Paul Rutledge, the Pastor of Risingsun First Church of God, in Risingsun Ohio. During our hour and a half long call, Pastor Paul spoke candidly about his life, with occasional injections of humor. Pastor Paul’s story has been at times conventional, at other times genuinely shocking and yet he told all of it with humility, and often fondness at even the roughest patches. What follows is an overview of my interview with Pastor Paul Rutledge about his life and pastoral journey. I hope reading it will be as uplifting for you as hearing it was for me.

“That is where my grandparents faith became my faith.”

One could say (and indeed I am saying) that Pastor Paul Rutledge is a quintessential Churches of God General Conference pastor. Not because the CGGC would collapse without him, instead Pastor Paul has brought to bear a lifetime of loyalty to the Churches of God. Having been brought up in the Ohio City Community Church of God in his youth, Pastor Paul has continued to serve in some capacity since his initial conversion experience at Camp Otyokwa when he was about 10. Kneeling at the cross on Vesper Hill in 1979, a young Paul Rutledge prayed to God. But, he did not pray alone, and this is a point worth mentioning. Pastor Paul’s story is filled with the names of those people who have helped him along the way. Wayne Hefner prayed with him on that hill, while Bob Eatherton was the Vesper Leader. And he drove the point home when he said, “That is where my grandparent’s faith became my faith.”

Pastor Paul’s grandparents (Joe and Juanita Brown – Mother’s side, and Jake and Betty Rutledge – Fathers side) were absolutely foundational in his Christian walk. “I am a pastor because of my grandparents”, he told me. Yet, despite this strong Christian foundation, and despite his numerous church/camp involvements, Pastor Paul seemed to push away the thought of an explicitly Christian vocation. To be sure, his professional intentions were to be an educator, while his religious intentions were “to grow up and be a good church adult.” On more than one occasion, mentors and leadership figures in Paul’s life expressed that he was clearly cut out for ministry. And while a young Paul Rutledge pushed forward with his B.A. in Comprehensive Social Science Education at the University of Findlay (then Findlay College), it wouldn’t be a stretch to say that God had other plans.

Having graduated in 1990, Paul struck out to find a teaching job. It would be an understatement to say that he cast a wide net. Paul found out quickly that very few places were looking for social science teachers. Paul’s search lasted for three years and during much of that time he was working at a factory job that he hated. “From 1990 through 1993 I got a rejection letter from all 50 states, including Alaska and Hawaii…”, it’s hard to imagine how difficult 50 separate rejections letters would be, but to hear him tell it now, it sounded more like brag or a badge of honor. At the end of this, Paul told me that he had “a dark night of the soul”, where he spoke to God frankly, and God spoke back essentially saying “you’re not doing what I want you to do, I want you to be a pastor”.

On Paul’s birthday in 1993, he spoke with pastor Bill Reist, who (while working at Winebrenner) apparently asked him the right questions, and Paul began to see his calling more clearly. He initially enrolled at Winebrenner as a half measure, intending to take only a few classes. With his trademark honesty, and somewhat ironically, Paul told me that “Seminary was hard as hell. When I finally got with the program, life got a lot better.” And through this time, God continued to open doors, clear paths, and make ways. Finances were taken care of, and clear confirmation of Paul’s calling came from both Christians and non-Christians alike.

“The number one thing you are getting paid to do is to love people.”

What interested me in his tumultuous journey is that Pastor Paul had a God focused mindset through it all. This is something that we may take for granted, as postmodern thought has moved us away from God as a foundational part of the world. Today struggles are often seen as a sign of God’s absence, instead of his dogged persistence to move you into a particular direction. But, this is how Pastor Paul understood his trials, not as meaningless suffering, but as God closing doors with a purpose. Paul’s view on God’s testing was made explicit when he said that “The proof that there is a God is because of the challenges in life.” When I asked Pastor Paul about this point, he reiterated that through all of his struggles, he has been empowered and uplifted by the people around him, going as far to definitively say that “Pastors wives are the unsung heroes of pastoral ministry.” 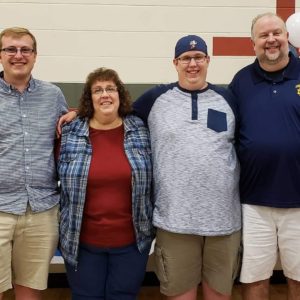 During seminary, Paul started an internship at Risingsun Church of God, and had very little intentions of staying there. But, the internship transitioned into a youth position, and eventually Risingsun hired him as their full-time pastor in 1996. But, even at this point, Pastor Paul was confident that he wouldn’t be there long. If for no other reason than because pastors don’t historically stay at any church for as long as he has.

Pastor Paul intended to be at Risingsun for no more than 7 years, with hopes of moving to a bigger city. Yet 24 years after arriving at Risingsun, he’s still there. Paul recognizes that he is a small-town kind of guy. “The church is small and rural, and I can’t seem to get away from small and rural… I seem to relate to that demographic really well.”

I assumed that 24 years of pastoral service was not all sunshine, and Pastor Paul assured me that it wasn’t. When asked about becoming disillusioned with pastoral work he responded “Oh yeah. I don’t have enough fingers and toes. It’s been too many [times].” He seemed to struggle with figuring out the metrics, about what defines success for a pastor, and what defines failure. “The number one thing you are getting paid to do is to love people. But, every person you are getting paid to love gets to define what that is, and it can change at any moment.” This relational aspect was central to Paul’s philosophy of ministry, but its clear that it is also a point of frustration. “It is tough, draining and confusing”, he said, before telling me that anyone seeking to be a pastor need to steel themselves, because “you are going to have your guts ripped out a couple of times. You are going to be hurt in ways you didn’t think was fathomable.” Despite how bleak this might sound, Paul made sure to reiterate that this is just part of the job. It is part of loving people and helping them deal with their problems. In what felt like a summation of 1 Corinthians 13, Pastor Paul said “I can have all the training I want. I can preach brilliantly, but if they don’t think you love them, you are not going anywhere.”
While pastoralship isn’t always sunshine, sometimes it is and Paul reflected on how well his years of service have gone at Risingsun. “My church gave me a lot of flexibility, they let me do extracurriculars. They have been very good to me.” Being a self-described ‘family man”, he was also thankful for not having missed much time with his children. In fact, Paul described a particular type of bond that formed between his family and the church when he had his first child there. “Having your first kid while pastoring, it does something for the congregation.”

While speaking to Paul about stressors, he spoke about how things that stressed him when he first started, like writing sermons or leading studies, have all become natural for him. It’s the special circumstances, like weddings, or funerals that can put him on edge. He said, somewhat comedically that “Even after 24 years of public speaking, I can still walk up and sound like a blithering idiot.” Despite his self-deprecating sense of humor, Paul recognizes that he has become “the funeral pastor” because his eulogies are often meaningful gifts to the family of the deceased. Probably due, in no small part, to his candor and humor. As a closing question I asked, “What does the gospel mean to you?” And rather than expound upon his answer, I will leave it as it is below.

“For me, it’s why I fell in love with Jesus in the first place. Christianity is the most fun you will have in this life with no regrets. When Jesus shows up, you have forgiveness of sins, you have the promise of eternal life. You have purpose, and truth, and in a sense, you have morality. You have love. And it’s all about relationships. If people don’t believe you love them, you’re sunk. It will change your reason for being here.”

Thank you for reading and thank you to Pastor Paul Rutledge for giving up his time to talk with me and to open up with such sincerity. Listening to him speak and writing this brief interview has been very moving for me. Likewise, I hope this small portion of Paul’s story has spoken to you.