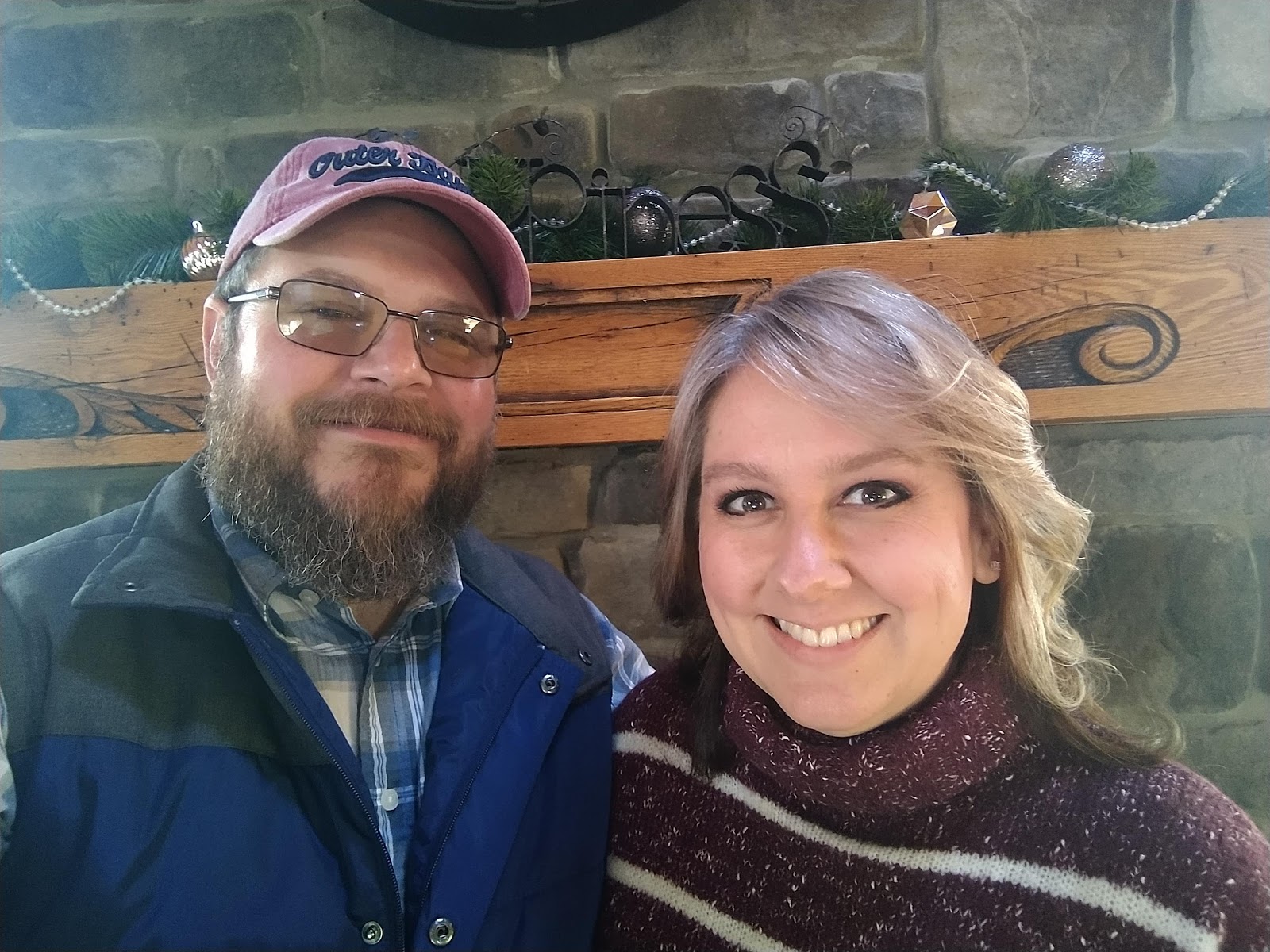 I had always imagined that being a bi-vocational pastor was a last resort. A pessimistic view, I know, but you should understand that I had only ever seen full time pastors make the change to be bi-vocational because the church could no longer support them financially. Dwindling congregants and religious apathy means that small town churches sometimes find themselves with an ever aging, ever shrinking population. I had always assumed that pastors felt they were called into ministry, and that this calling could only be fully realized if they were a full-time pastor. I say “I had” because my opinion has since changed, in no small part because of a fruitful discussion I had with Pastor Jason Boroff of Mendon First Church of God. Jason told me his story while sitting in his backyard, surrounded by 3 acres, some chickens, a few goats, and a lovely garden (or so he tells me, we were doing this over zoom after all). He spoke to me about his journey to Christ, about his immediate family, his church family, and about the Mendon community.

“It scared hell out of me. That was my version of coming to Christ”

Jason was 34 years old when he came to Christ. Before this he had already been going to church for a few years because Kristina, his wife, had been attending Mendon for most of her life. He hadn’t grown up Christian, and he told me that in his youth, “I wasn’t interested. I always felt really uncomfortable. Like I was being watched.” Jason’s decision to commit himself was largely because of Pastor Dean Bruce’s influence, and a Christian radio show that had caught his attention. When I asked what clicked for him, he said “Being prepared for, not the end, but your end. You don’t know when your time is done.” Being puny, he chuckled that “It scared hell out of me. That was my version of coming to Christ”

It’s interesting to me that Jason, who had been largely uninterested in God for 3 decades, would feel compelled to seek Him out when confronted with ideas of death. And that is an important distinction that should be made. Despite not being a Christian, Jason was probably never an atheist. I asked him if there was always an underlying belief in God and he said “One of the influences in my life was my uncle. When we were just little kids, I remember him taking us to vacation bible school. There were nudges all along the way. You find yourself praying but you don’t know how to do it, or who you’re praying too. I would say, definitely was.” The family and culture that Jason grew up in had instilled in him a sense, however faint, that there was a god out there somewhere, watching and listening. I wonder how often this still happens? Is a growing atheistic sense in our culture making this less likely?
About 5 years ago, Jason was being considered for the pastorship of Mendon First Church of God. Pastor Dean had decided that it was time for him to retire, and be with his family in Montana. The elders of the church convened to decide who would move into a position of leadership. By this time, Jason had genuinely taken hold of his faith. His many questions required answers and so he asked his wife, and if she couldn’t answer them, he asked Pastor Dean. He found a passion for learning about the Christian faith, and as his knowledge grew, he found an equal passion in educating others about Christianity. He taught children, and this naturally extended into teaching adults as well. All along, Jason never stopped asking, learning and teaching. Even as he moved out of the area of Christian ed, he assumed the role of Elder and helped give the sermon when Pastor Dean was away, sometimes preaching for a whole month straight. This transformation, from anxious outsider to gospel preacher, was one reason why the elders agreed that Jason should become the pastor of Mendon First CoG.

Yet, before Jason could accept the role, he needed to make one thing clear, he would not be leaving his current job, he would have to be a bi-vocational pastor. Jason works for an IT company, and he loves his job. So much so that he describes himself as a “data guy, a facts and figures kind of guy”. It’s the way he thinks, it’s even the way he approaches Christianity. He asks questions, gathers the data, and comes to a conclusion. One conclusion that Jason came to was that things in the church were going to need to change. “The church went from a full time pastor to a part time pastor. I knew I was going to need a lot of help from our church for them to step up and fill in.”

The way Pastor Jason describes his church family has helped to reframe the way I think about pastorship. Every year more and more books are published for pastors to read about motivating their congregation, about how to lead more effectively. Still, there is a sense that for some congregations, God is relegated to Sunday mornings, some holidays, and maybe the occasional potluck. If it is hard for a full time pastor to achieve and motivate their church family, how much harder for a bi-vocational pastor (I thought!). Pastor Jason suggests this is a misconception, and that, at least for his church family, it was exactly the opposite. “One of the benefits was to spread the need to be doers, instead of hearers only, to the rest of the church. It’s been really good, as far as that goes”.

“The church can’t just fall on the shoulders of one or two people. Sometimes it feels like it is. Like right now.”

Mendon First CoG responded by stepping in when Pastor Jason could not. Jason recalled a story he named “The March of the Moms”. According to him, there was a non-churched family that was struggling during a church gathering. Before he could move to comfort them, he watched as the church responded. “All the moms got up and took care of this family. I watched these people step out where I wasn’t used to them doing that. We all have to pull together to make this work. This is the only way we can do this. It’s one of those things that sticks in my brain.”

I have a heart for pastors who struggle under the weight of church obligations. Pastors who feel overwhelmed by their calling. And Pastor Jason summed a potential solution to this well, while speaking about the Covid19 pandemic. “The church can’t just fall on the shoulders of one or two people. Sometimes it feels like it is. Like right now.” The isolation exacerbates the feeling of having everything on your shoulders. Even still, Jason spoke fondly of the emails, texts, and phone calls that he gets from his church family, who are all yearning to worship and work together again.

“I would love to work myself out of a job. How cool would that be?”

When speaking about his calling to ministry, Jason spoke candidly about his goals. When Pastor Dean was the lead pastor, Jason had come alongside as a disciple, and grew under his leadership. Jason is currently looking for someone like that. He wants to raise up disciples who make disciples. He told me that “I would love to work myself out of a job. How cool would that be?” There is a humility to Pastor Jason that allows him to see his place at Mendon, not as the most important figure of his town, but as a dutiful servant. He cherishes this church and community and despite Mendon being a small church family, he doesn’t see it as a steppingstone to some extravagant church.

During the interview Jason often called his congregation his “church family”, and I’ve tried to reflect that here as well. The change of terms isn’t just idiosyncratic though, he has a good reason. Jason’s wife and four children have all helped and been a part of the church. In a way, the church has become a family business, with Kristina helping with church finances and while one of his sons has become a trustee. When Jason goes to work at the church, they all go. I asked Pastor Jason about the struggles of being a pastor, and about how it might have affected his family life. He told me that first and foremost, he works to protect his wife from the ugly side of ministry. “It’s something I still practice as much as I can. Protecting our marriage at the same time. Family comes before that, for us, but at the same time, our family does all that. It’s all together.” This strategy was learned from one of his mentors, Pastor Randy Christian of the Lord’s Abounding Grace Church in Celina, OH. Pastor Darwin Dunten of Mt. Tabor Church of God has also been influential and helpful to Jason, who found that confiding only in his family about the struggles of ministry can over burden them with stress.

Another aspect of ministry that Jason helped illuminate for me is that bi-vocational could just as easily be called bi-ministerial. His IT job has also been a place where he can have meaningful discussions at the lunch table, sometimes even gospel discussions. Speaking fondly of his co-workers and his IT job he said, “It’s an opportunity to make connections. We joke about things. It’s an opportunity to show how Christians in general can be examples outside of the church.” And opportunities like this extend out to his Kristina’s occupation as well, who gets to talk about her faith and beliefs. It’s a ministry for the whole family, and it’s a way of life for the Boroffs.

Bi-vocational ministry is as much of a calling as any form of ministry, and it’s something I’ve had to reconsider. Pastor Jason and his family demonstrate the Christian values of service that Christian ministers often aspire to. His continued pursuit of Christian learning, as he pursues a PTI degree from Winebrenner Theological Seminary is also indicative of this. Likewise, his fresh take on the benefits of a small churches, and bi-vocational ministry were genuinely uplifting.

The last question I asked Pastor Jason was “what the gospel means to you?” His response is below. Before I leave you with that, I want to thank Pastor Jason for donating to me his time, and for graciously correcting me when I said “Nice to meet you”. (We were together in class for 12 weeks!)

“The gospel is the good news that helps us point them towards Jesus. What it means to me is: the way to live. It travels with you through your faith. It’s the truth that leads you to Christ. Shows you how to live. The light we give to others as we are handing it on. The guide to how we treat others. It encompasses all of life. The fact that the gospel is bound, in and through Jesus. It’s the meaning of everything. Living for him, through him, being his hands and feet through it all. And trusting.”